Tony was singing to a backing track and sang:

This was an evening of James Bond Film theme tunes. Tony was the headline act and sang seven songs plus a bit of the final medley. He was accompanied by West End Concert Orchestra, the conductor was Martin Yates. The other performers were Carmen Cusack, Alex Sharpe and Michael Xavier.

Tony sang:
Live & Let Die
Goldeneye
We Have all the Time in the World
A View to a Kill
From Russia with Love
Tomorrow Never Dies
Thunderball
Nobody Does it Better (sung as part of final medley) 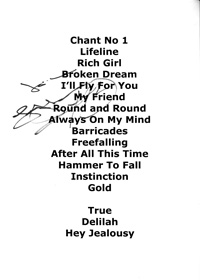