The set was:
To Cut a Long Story Short
The Freeze
Highly Strung
Only When You Leave
I’ll Fly For You
How Many Lies
Virgin
She Loved like Diamond
Once More
Round and Round
Always in the Back of my Mind
With The Pride
Through The Barricades
Instinction
Communication
Lifeline
Chant No. 1 with Paint Me Down in the middle
True
– – – – – – –
Fight for Ourselves
Gold

The set was the same for the Berlin and Dusseldorf shows on the following days.

The set was:
Too Close for Comfort
Mack the Knife
Suspicious Minds
Only When You Leave
Love for Sale
True
That’s Life
Wives and Lovers
The Lady is a Tramp
Wait for You
Feeling Good
Just a Gigalo
Fly me to the Moon
There must be a way
I wanna be around
Bewitched, Bothered and Bewildered
The Good Life
Encore:
Delilah
Let’s Stick Together
Gold

Spandau Ballet playing after the racing. 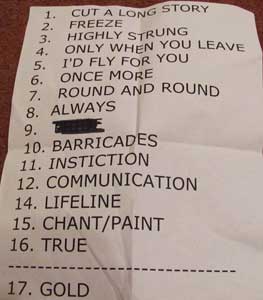 An outdoor festival with Rick Astley, Martin Fry and Belinda Carlisle on the bill with Tony. 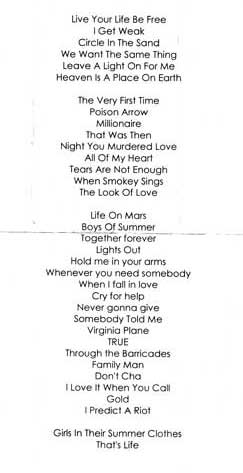 An outdoor festival with Rick Astley, Martin Fry, Go West and other 80s artists on the bill with Tony. 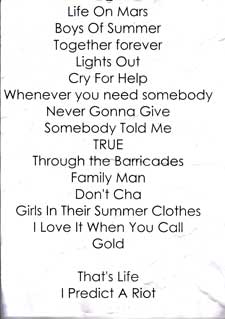 An outdoor festival with Rick Astley, Martin Fry, Go West and Carol Decker on the bill with Tony. 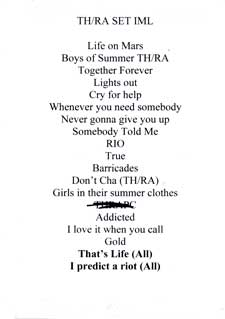 An outdoor festival with Rick Astley, Martin Fry, Go West, Belinda Carlisle and Mica Paris on the bill with Tony. 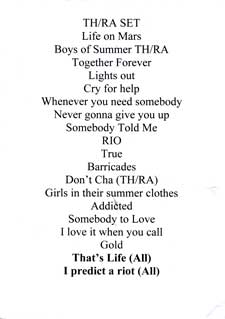 Outdoor festival with multiple 80s acts on the bill. 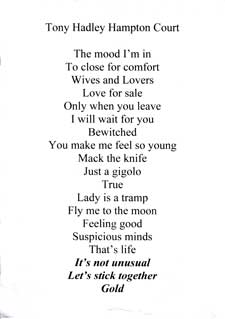 This show was organised to celebrate the 30th Anniversary of the Sandhurst Boys and Girls Football Club and in the process raise money for the club. The band was John Keeble, Phil Taylor, Phil Williams and Richie Barrett. 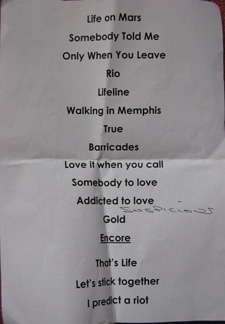 This was a dinner and fundraiser for the Lowe Syndrome Trust.  Due to bad snow, John Keeble was not able to get to Jersey, so the band was Phil Taylor, Phil Williams,  Richie Barrett, Dawn Joseph and a local drummer Paul Clark who was a friend of Dawn Joseph’s Dad. 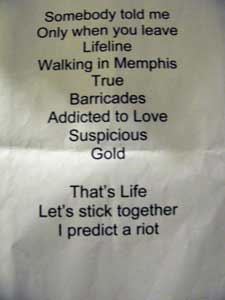 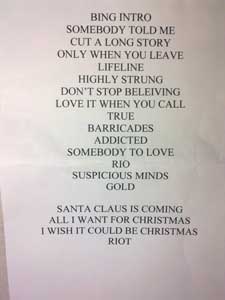