After the tour with Go West in 2004, it was decided to do a similar tour with Martin Fry of ABC. The way this tour worked was that Tony would sing songs, Martin would sing songs and other songs were done as duets.

As a pre-tour taster and to record a CD and DVD there was a show at The Stables, Milton Keynes on 13th December 2004. 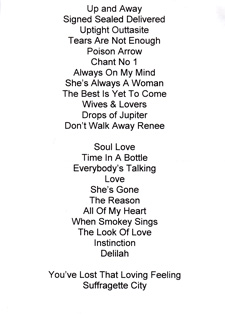 The songs they sang as duets were Up and Away, Signed Sealed Delivered, Soul Love, You’ve Lost That Loving Feeling and Suffragette City.

The resulting CD and DVD had the following tracks on them: